We have selected just a few examples from the FIV cats who have lived in the sanctuary. We have chosen each as an example of how well FIV cats can do - some have other problems to deal with on top of the virus 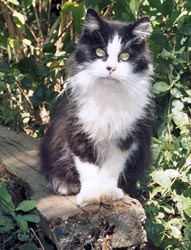 Late spring 2002 saw Dougal's arrival. He was a bit dishevelled when he arrived, but turned into a really handsome cat.

He came from Bridgwater, where he had been left behind after a house move. Neighbours fed him until such time as he needed veterinary treatment for a bad mouth, which stopped him eating. Testing positive for FIV, Dougal came to join the 'garden gang'.

In 2004 Dougal was a classic thyroid case; he dramatically lost weight and condition, whilst being ravenously hungry. The thyroid becomes overactive and can be treated by removal or long-term medication. Dougal had his thyroid removed after a long period of medication, building him up to the right level for the operation. It was very successful.

During 2006, however, Dougal's thyroid troubles returned, but another operation was not possible. Blood tests showed what dosage of tablets he needed to keep him stable, this being reviewed at six-month intervals. These reviews showed the results were fine, meaning that the prescribed dose was containing the problem.

Dougal did very well in this way, but kidney failure set in and the battle was lost in 2007.


Dougal is a good example of the resilience of an FIV cat. Although he had a difficult time, none of his problems had anything to do with his FIV status; any cat could have suffered them. 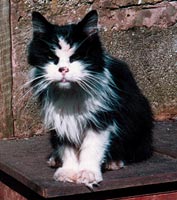 ...but after the operation, he recovered to near his best.

and one for luck: